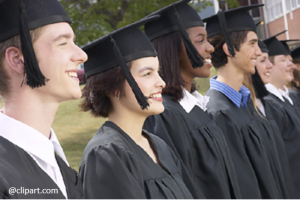 Congratulations to everyone who just graduated from college this year.  It’s a huge accomplishment and graduates and parents of graduates should be quite proud.  I am continually impressed with these young minds and spirits.

My daughter graduated this weekend from Fairfield University.  I cannot express how impressed I am with her and her journey so far.  She took college very seriously; she had fun, but really dove deep personally and educationally.  She didn’t do what I did–ski and play rugby (need I say more)–but she really stepped up, raised her standards and worked hard, finishing with an impressive GPA with two minors.

Now the rubber meets the road for these graduates. Commencement isn’t the end, it’s the beginning.  How are these graduates with these expensive educations going to make a difference in the world?  That’s up to them.

I listened to the Fairfield commencement speaker, who did a fantastic job, say: “The world’s is tough place. Things don’t always go as planned. Work hard for the greater good.”

As I sat there, I thought of other great commencement speeches I’ve heard: Steve Jobs, Kurt Vonnegut, Sheryl Sandberg and many others. And I asked myself, “If I was ever a commencement speaker, what wisdom would I like to impart on the audience?”

I would give them credit for the work they just completed.  For four years, even if they didn’t work super hard, they committed the time and had the persistence to finish something.  That’s a great accomplishment in itself.  I would encourage taking risks, dreaming big, daring to fail.  I would tell them to never drive drunk or get in a car with anyone who was.  I learned this when I was 20.  My roommate was a passenger in a late night head-on and was killed–he was 19.  That was a wake up call.

I would tell them to do something I don’t think I did too well.  Enjoy the ride, every step of the way.  We all get only one lap around the track.  Know this now.  Go after it, but remember to enjoy it.  I see that all the time now.  Another wake up call.

I would tell them to spend daily time meditating; that humans are the only living creature that doesn’t live only by instinct. We can at any point change the path we are are on.  I would encourage setting and writing down goals and advise how to persist through the hard times that will occur through the their lives.

I would say: don’t procrastinate. Procrastination gets me into trouble constantly. When I address the hard issues head-on, I am much better off, every time. The times that I waited to the last minute and procrastinated on my decisions led to a harder situation or cost me lot of money.

I would encourage everyone to eat mostly plant based organic food, drink water first thing in the morning, and exercise at least five times per week.  Believe me, with these three simple principles, you will perform better, be smarter, and statistically live much longer.

So cheers to all recent college grads – get out there and make a difference with your life, big or small. Find important work and dare to fail. Believe me, failure is not failure–it’s learning. Not trying is the only real failure.

Cash is something every business needs and wants, but is unlikely it will flow to the degree we want it every week.  Therefore, the ability to “predict cash” (which sounds lofty–like one of the four pillars of business philosophy)  is an essential art and science for most business owners and it doesn’t have to be that hard once you apply some intentional effort.

If cash is tight, you need to plan for payroll and large expenses or inventory purchases. If you have plenty, you need maximize your capital and debt efficiency. So being able to predict cash is an invaluable skill. Here are some tricks to help you get better at it.

Six Tricks to Improve Your Ability to Predict Cash

Put these tricks into practice and see how your information and expectations improve.

Get my list of 10 Common Mistakes Business Owners Make!